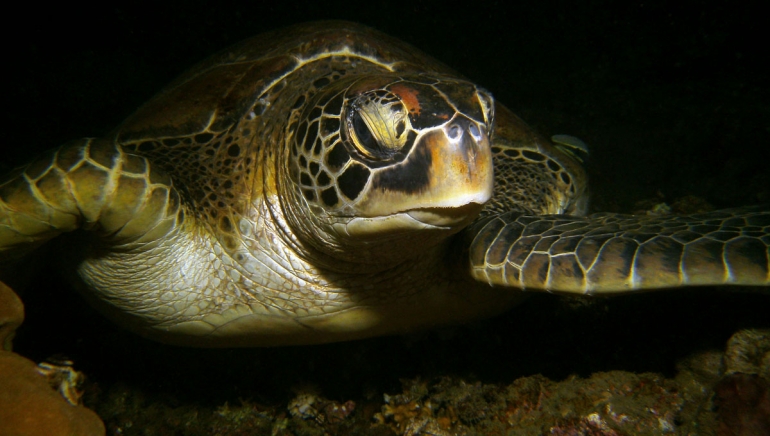 Green sea turtles are a favorite of many people, divers and non-divers alike. They are truly graceful creatures, always a lot of fun to swim with underwater, and at Atmosphere, we are very lucky to have an abundance of Green sea turtles at Apo Island and even here along the Dauin coast. They are found worldwide in tropical and subtropical waters.

Like other marine turtles, the females crawl on land to lay anywhere from 100-200 eggs which hatch roughly two months later and crawl back into the ocean. The first minutes of life are a very dangerous time for a baby sea turtle because during this frantic crawl they are exposed to numerous predators, such as crabs and shorebirds, as well as crawling in the wrong direction towards lit buildings if careless homeowners have not turned off their lights. After they have made it to the ocean, they have to deal with Tiger sharks and humans as their main predators.

Only about 1% of Green sea turtles make it to maturity. Sea turtles usually return to the same beach where they were born to nest, even after having travelled thousands of kilometers over twenty years or so. Adult Green sea turtles are normally herbivorous, feasting on seagrass beds, but juveniles have been known to nibble on sponges as well. Turtles are air-breathers, but they can hold their breath for a few hours as long as they are resting since their breath-hold ability depends on stress and activity.

Green sea turtles are endangered and are still being poached, even here in the Philippines, for their shells, eggs, and meat, and their nesting habitat is shrinking due to human interference – construction, noise pollution, and light pollution. Please remember not to chase sea turtles and cause them stress – if they want to swim with you, they will!