Sargassum fish on the house reef 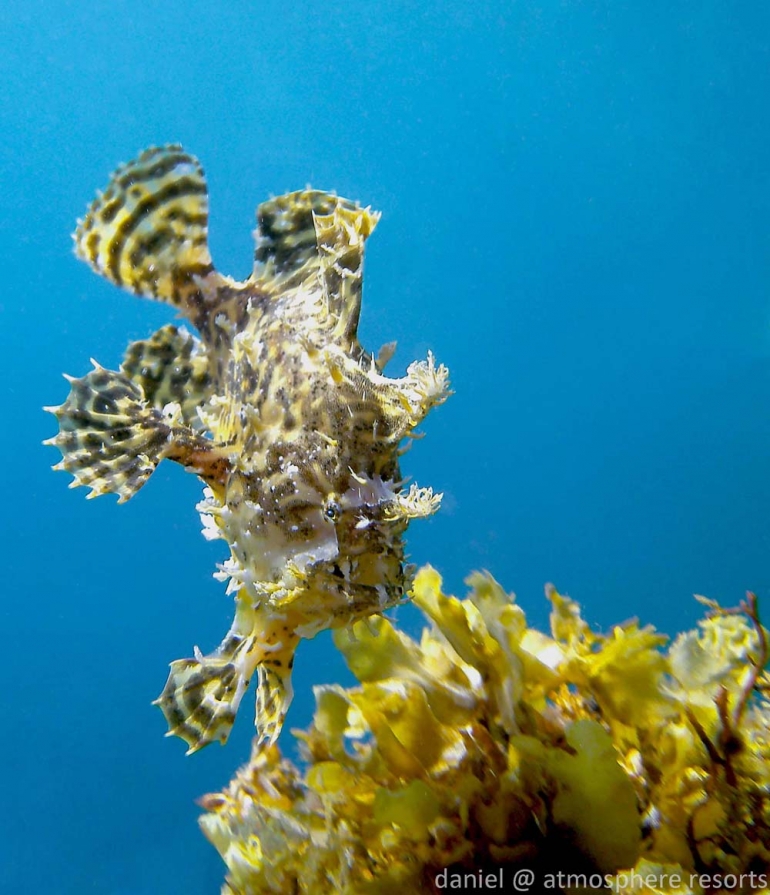 While unloading tanks after yesterday’s last dive, this weird-looking fish was found by our dive support, nearly washed up on the rocks outside Atmosphere Resorts. They scooped it into a saltwater-filled cooler and called me over to identify it. It turns out that it was a Sargassum fish!

A Sargassum fish is actually a kind of frogfish, found in tropical and subtropical seas. They spend their entire lives associated with floating sea grass beds – mostly sargassum algae, a type of brown seaweed. They can even be found floating on or inside of random objects like tin cans. They are camouflaged to blend in with the sargassum. They can use their modified pectoral fins to cling to it where they can wait and use their lure to ambush unsuspecting prey like small fish and shrimp who are also finding refuge in the sargassum.

They have the ability to jump out of the water on top of the sargassum to escape underwater threats and can even survive out of water for extended periods of time.

Sargassumfish are the only species of frogfish that are distributed worldwide and there are reports of one even found in Norway, although it surely wasn’t there on purpose. Sargassumfish are not commonly encountered due to their preferred habitat, floating seaweed, so it was a real pleasure to be able to see one up close. After a few curious guests (and Atmosphere staff) had a look at the fish and took some photos, I swam it out to much deeper water and released it near some large beds of sargassum where it was last seen swimming towards Apo Island. We hope to see one again soon!