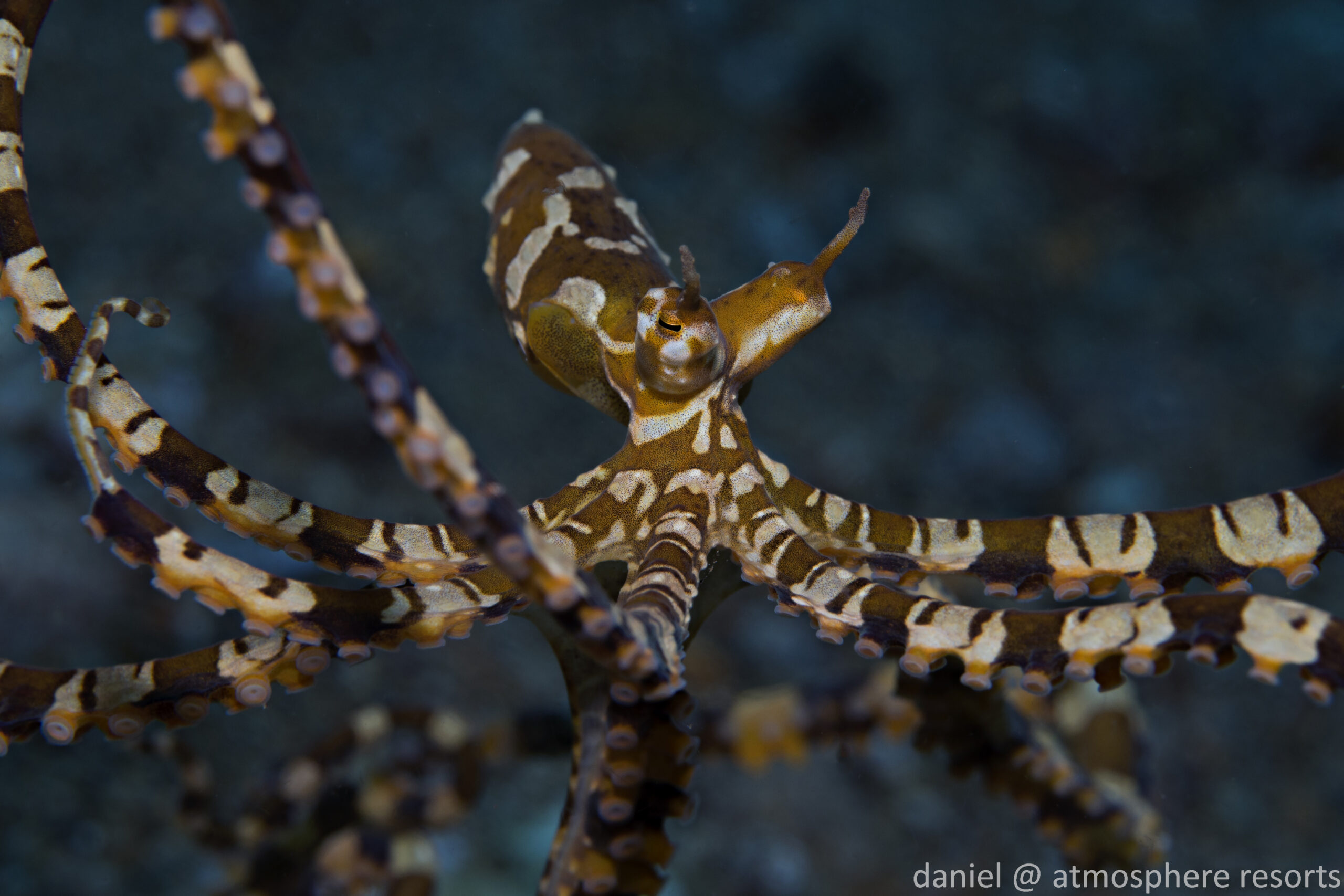 Beneath the sparkling turquoise waters of the Philippine’s Dauin coast, a unique community of tiny critters is thriving. Just meters from Atmosphere Resort’s peaceful shoreline, this intriguing ecosystem draws divers and underwater photographers from across the globe. Dauin and the Dumaguete area are a mecca for muck divers, and here at Atmosphere, we are perfectly situated to cater to the most experienced macro enthusiasts. However, we also offer a range of courses for divers keen to delve into this miniature world for the first time. If you’ve heard the terms ‘muck’ and ‘macro’ but aren’t really sure what’s involved, our partners at Bluewater Dive Travel have broken it down for you.

What is macro photography?

Put simply, macro photography is the close-up photography of small subjects such as nudibranchs, seahorses, and shrimps using specialized lenses that magnify the subject to life-size or greater. Macro photography creates some spectacular images of details not normally discernable to the human eye, raising seemingly ordinary subjects to the extraordinary.

This can be taken one step further by using a wide-angle lens to shoot a macro subject so as to include the subject’s environment in the shot. This is known as wide-angle macro and delivers a critter’s eye view of their habitat, often with greater impact than shooting the subject alone.

And what about muck diving?

Rather than inhabiting a reef or coral garden, many tiny critters and juvenile fish can be found in or on the sandy sea bed. In much of southeast Asia, where muck diving was first coined, this sand is black and when disturbed it fills the water with plumes of silt, drastically reducing visibility. Because of this, some of the best sites in the world for finding macro species are known as muck sites.

As well as your standard underwater camera, there are a few additional pieces of specialized equipment that will help you get the best results from your macro photography. It is perfectly possible to shoot macro with a compact camera, and the benefit of this is that you don’t have to worry about switching lenses as the camera has a fixed lens. However, there is a limit to what you can achieve, and most underwater photographers will use a DSLR camera with a range of macro specific lenses. The third option is to use a mirrorless camera, which as the name suggests, doesn’t contain the same bulky mirror as a DSLR, making them smaller, lighter, and generally more comfortable to transport and use underwater.

A lens is considered macro if it can shoot at a magnification ratio of 1:1 or more. This means that the subject is captured at its true size, so shooting a 10mm subject with a 10mm image sensor will result in the subject filling the final photo. For seriously small subjects, or if you’re using a compact camera that doesn’t allow for 1:1 magnification, it’s possible to use what’s called a wet diopter. These are additional magnifying lenses that attach to your existing lens for super-macro shots. They do take a bit of practice but are an essential bit of kit for those ultra close-ups!

While you can use your camera’s internal flash, it is advisable to invest in at least one decent strobe to effectively light your shots. In addition, your images will benefit from a focus light to help your camera achieve focus as quickly as possible, and a diffuser to reduce the harshness of the light and help avoid ugly shadows and backscatter. You may also see macro photographers using a snoot to control the direction and radius of their light beam.

Traditionally, macro photography subjects are the small and often camouflaged species that most of us don’t even notice during a dive. Capturing and magnifying these critters gives us a whole new perspective on their behavior and interaction with other marine creatures. True macro hunters will spend half their dive simply searching for a single elusive subject, and the rest of the dive in one spot trying to get the perfect shot! It’s also not uncommon for photographers to ‘collect’ or specialize in certain species, for example, nudibranchs or frogfish.

While thumbnail-sized creatures may be the most obvious target for a macro-photograph, some great images can be captured by taking a close-up of part of something larger, for example, a fishes eye. Also, consider sedentary subjects such as coral polyps or sea fans. As mentioned before, macro photography raises what we consider ordinary to the extraordinary.

A good tip for maximizing the efficiency of your shots is to identify a subject and storyboard your dive before getting in the water. This allows you to choose the most suitable camera setup and predict the best settings to get effective shots. Here at Atmosphere, our experienced guides know the local reefs better than anyone and are experts at spotting the smallest of critters for our photography guests. Just tell them what you would like to photograph and they will do their best to deliver.

Getting the perfect shot

Macro photography is rewarding but far from easy, and even seasoned underwater photographers will find the transition challenging to begin with. Working at high magnifications requires precise focus, and every tremor or shake is multiplied so that the tiniest margin of error will make or break your picture.

Then there’s the issue of how much of the shot is in focus, known as depth of field. As you magnify a subject, the depth of field reduces until only a single point in the photograph is in focus. For some shots, this may be the effect you want, however, the best way to resolve depth of field issues is to shoot with a narrow aperture. This in turn dramatically reduces the amount of light getting into the camera which is why most macro photographers use a flash or a strobe.

New macro photographers will find it easier to begin shooting slightly larger subjects requiring lower magnifications while they get to grips with their new set-up. Try shooting with a stationary test subject first and experiment with different angles. A nudibranch can look strikingly different when shot from low down as opposed to from above. Also, consider whether your subject is exhibiting any interesting behavior that you would like to catch. Cleaner wrasse, for example, flitting around a moray’s mouth, or a nudibranch with its gills fully open.

The dive sites around Dauin boast a world-class array of macro subjects, including some very unusual and rare species seldom spotted elsewhere. Seasoned muck divers know that they have a better chance than almost anywhere else for shooting incredible critters such as the wunderpus, blue-ringed, and mimic octopuses, flamboyant cuttlefish, pygmy seahorse, ghost pipefish, and bobtail squid to name a few.

So whether you are a muck diving aficionado, or simply fancy trying something new, Atmosphere Resorts & Spa is the place to be for macro photography.