Into the Deep with Daniel (part 2!)

By Daniel Geary11th July 2016No Comments

A common theme for deep sea fish and other animals is that they look really ugly or scary. This is due to the extreme environments in the deep sea, the reason these fish have to make just as extreme adjustments. Due to the scarcity of food and sunlight as well as the pressure of having thousands of meters of water above their heads, deep sea fish bodies have altered significantly from their shallow water relatives. There are plenty of deep sea fish to choose from but I have chosen eight of my favorites to share. These are rarely encountered by humans and only seen when they have been caught, when they are sick, or if they are dead.

Gulper/Pelican Eel (Eurypharynx pelecanoides) – This eel, rarely seen by humans, is basically a terrifying  hybrid of a pelican and an eel. It has a loosely hinged jaw and a mouth that is larger than its body. It has no pelvic fins, scales, or a swim bladder, but has a very long whip-like tail that it uses for movement. It can grow up to 0.75m

A jaw and a body? A Gulper eel doesn’t need much else. Photo Credits: Doc White

Fangtooth Fish (Anoplogaster sp.) – This fish is named for its huge, fang-like teeth. It has a small head with a big jaw and a very unfortunate complexion. It has the largest teeth-to-body-size ratio of any fish. The teeth are so large that the mouth has pockets for the teeth to slide into when closed. Fortunately, this fish is only found in the deep and can only reach a maximum size of around 18 cm. This is one of the few species of deep sea fish that researchers have been able to keep in captivity for months.

Check out the gigantic fangs on this Fangtooth. Photo Credits: Monterey Bay Aquarium

Viperfish (Chauliodus sp.) – This fish is a less scary version of the gulper eel with many long teeth that resemble needles. It has a photophore, which is a light-producing organ, on the end of its dorsal spine that it uses to lure prey by flashing it on and off while moving the dorsal spine. They have been documented remaining motionless for hours, waiting for prey to come close enough to capture. They can grow up to 60 cm.

Nothing is getting past the teeth of this Viperfish. Photo Credits: Fine Art America

Anglerfish (Suborder Ceratioidei) – These are the uglier, deeper relatives of my favorite, the frogfish. They have a large, bioluminescent lure used for hunting prey and attracting males. Some species have females that can grow to a meter but the males max out at less than a foot, usually a few. When they are ready to mate, the male morphs into a parasite, lacking a lure and teeth, and basically attaches to the female using special hooks and degenerates into a reproductive sack, physically fusing as one with the female.

Giant Isopod (Bathynomus giganteus) – This crustacean is considered the largest isopod in the world, growing to a maximum length of 76 cm, compared to the ‘normal’ isopods that grow up to 5 cm, and a maximum weight of 1.7 kg. This is an example of “deep-sea gigantism,” a phenomenon where animals in the deep sea are much larger than their shallow water or land counterparts. They are scavengers so they can go a long time without food, with some surviving over five years in captivity without food.

Goblin Shark (Mitsukurina owstoni) – Most people know this shark because of how ugly it is. It has pink skin and a very elongated snout with protrusible jaws that can extend when capturing prey.  This shark is normally between 3 and 4 meters but can grow even larger when mature. The name goblin shark comes from its Japanese name tenguzame which is from the word tengu which is a mythical Japanese creature that has a red face and a long nose.

Check out the nose on this Goblin Shark. Photo Credits: Fishes of Australia

Black Swallower (Chiasmodon niger) – This fish earned its name by being able to swallow fish that are much larger. It only grows to around 25 cm but it is has a very distensible stomach that allows it to swallow prey that are 10 times its weight and twice its size. Many specimens that have been discovered were found on the surface after swallowing prey so large that they began decomposing before being digested, releasing gases and sending the swallower to the surface. 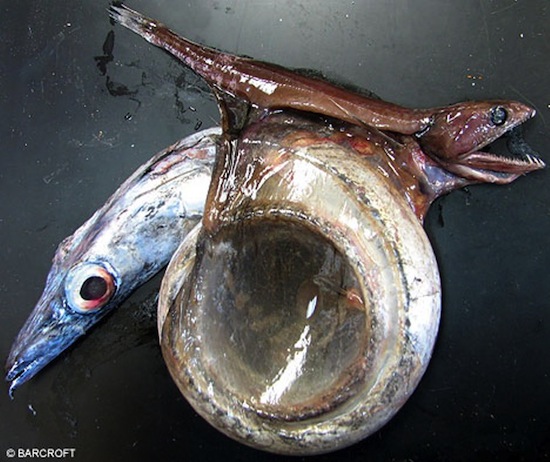 This fish’s meal was also its last. Photo Credits: Barcroft

Colossal Squid (Mesonychoteuthis hamiltoni) – Very little is known about this squid as it has only been seen or found a few times. It has an estimated maximum size of 12-14m and is roughly the same size as the Giant Squid, except that its body is proportionally larger and has smaller tentacles than the Giant Squid. It has an estimated eye size of 30-40 cm. Their tentacles have suckers lined with small teeth and sharp hooks – some swivel while others have three points. They have been known to attack Sperm Whales, although this is most likely self defense since they are a key prey item of Sperm Whales.

Colossal is an appropriate name for this squid. Photo Credits: New Page Books