A Harley on the Atmosphere House Reef 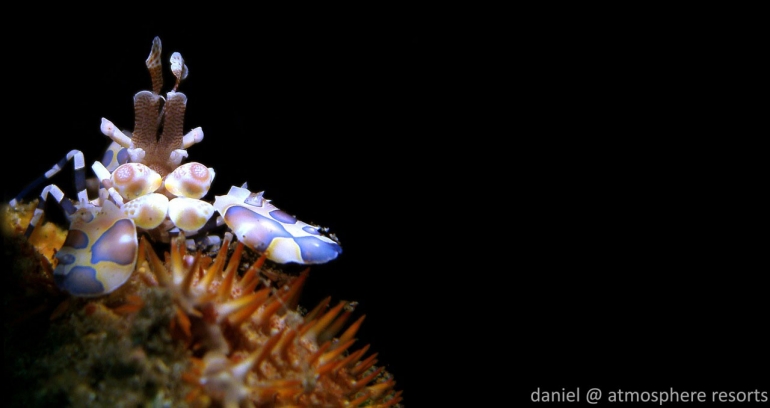 One of the most sought after underwater critters is the beautiful harlequin shrimp, found in the Indo-Pacific. Despite being a very rare critter, the harlequin shrimp makes an appearance in Dauin from time to time and is mainly found in coral reefs, not at ‘mucky’ dive sites. We have been lucky at Atmosphere, with three visits this year, counting in the one on the house reef right now!

“Harleys” as many call them, are usually found in pairs and often mate for life. We had a pair in March and, more recently, this single female in August. In a pair, the male is the smaller of the two, with the female growing to a length of about 5 cm.

Harlequin Shrimps are usually cream colored with blue or pink spots. There is debate whether the ‘pink’ (central and east Pacific) and ‘blue’ (west Pacific and Indian Ocean) “Harleys” are the same species or not. I have seen both variations on neighboring islands here in the Philippines, which means that they are either the same species or have an overlapping habitat, which can make things confusing for scientists.

A special thing about harlequin shrimps, especially for photographers, is that they feed almost exclusively on sea stars, commonly the blue Linckia sea stars, and can even be found feasting on crown-of-thorns, like the one in the photo from our house reef! This can lead to perfect, award-winning photographs with amazing composition. This is why many photographers will travel great distances just to photograph one of these amazing shrimp. Some consider them special guardians of the reef because of their ability to feast on crown-of-thorns, which feed on coral and can infest reefs and cause major damage.

When these shrimp find a sea star, they will flip it over together, immobilizing it, and feed on its tube feet and soft tissue. They’ll sometimes drag it into a crevice so they can feed on the sea star in peace. Some shrimps have even been known to feed their starfish to keep it alive so they can continue to have a guaranteed meal. Very clever! If they are really hungry and there are no sea stars around, they have been known to feed on the tube feet of sea urchins as a backup. Not only do harlequin shrimps have a very interesting lifestyle, but they are amazing to watch as well. They move at a very slow pace and are very ‘wavy’ in their movements, almost constantly waving their claws around in front of their body, which can seem very hypnotic. These shrimp suffer from coral reef damage since that is their main habitat, so it is important to maintain good buoyancy and diving etiquette when underwater.