The truth about the frogfish yawn 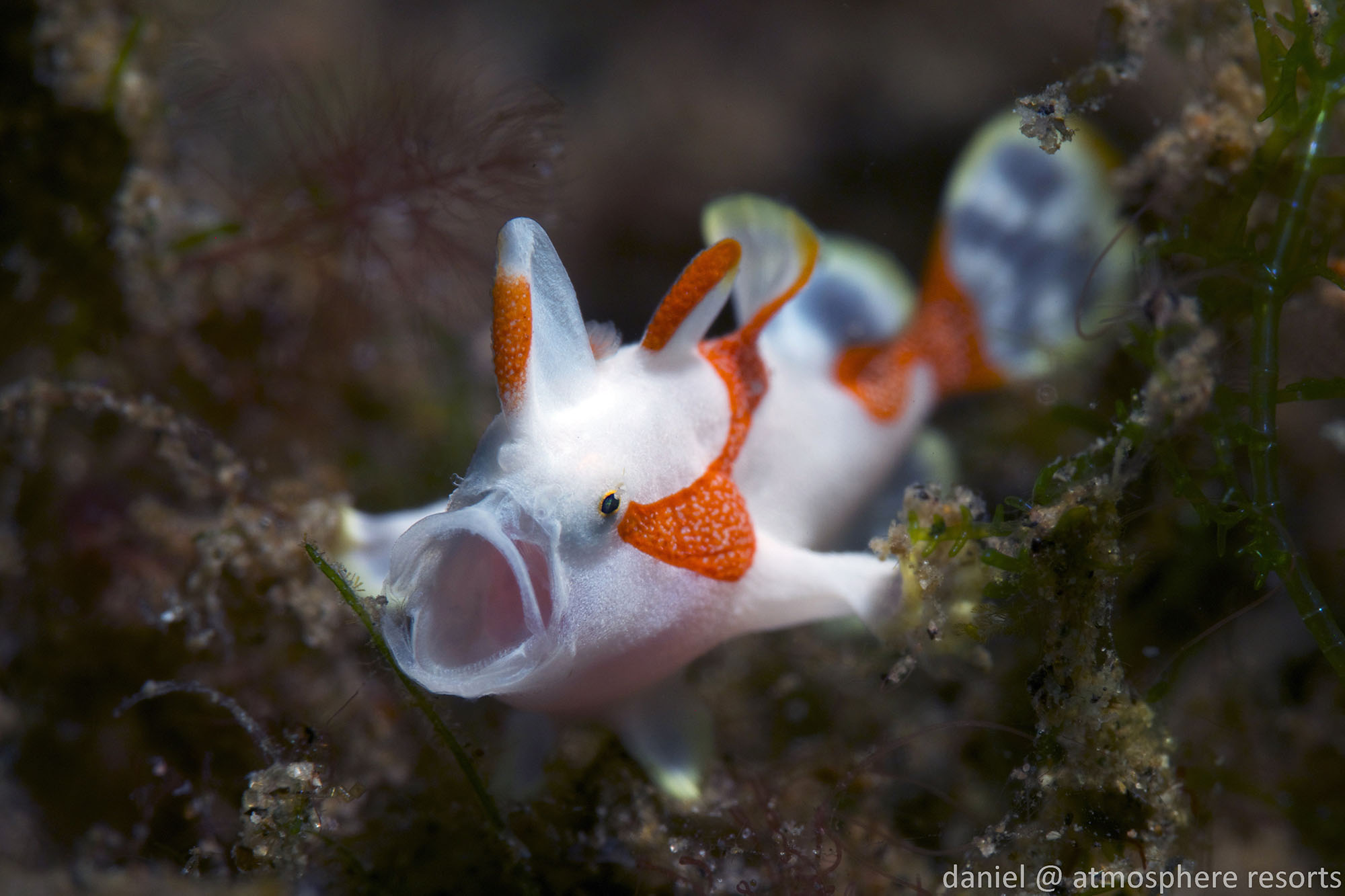 You think the frogfish is yawning? Think again…

In honor of recent Frogfish February (and March!), I have decided to write yet another frogfish blog. For this one, I’m going to focus on the facts behind the ‘holy grail’ of frogfish photos – the yawn. Every photographer wishes for the frogfish yawn, although sometimes you can wait an entire dive and still not see it. Other times, like waiting for a hairy frogfish to yawn, you let someone else take some photos and it yawns seven times in a row. Such is life. A frogfish yawn is a very funny sight. This fish, out of nowhere, extends its mouth and can increase the size inside up to twelve times the original volume. When a frogfish yawns, it really allows you to see the huge muscle in the throat that keeps the fish inside the stomach once captured. You can also see the small rows of teeth, although they don’t really use them that much considering their swallow-whole approach to feeding. 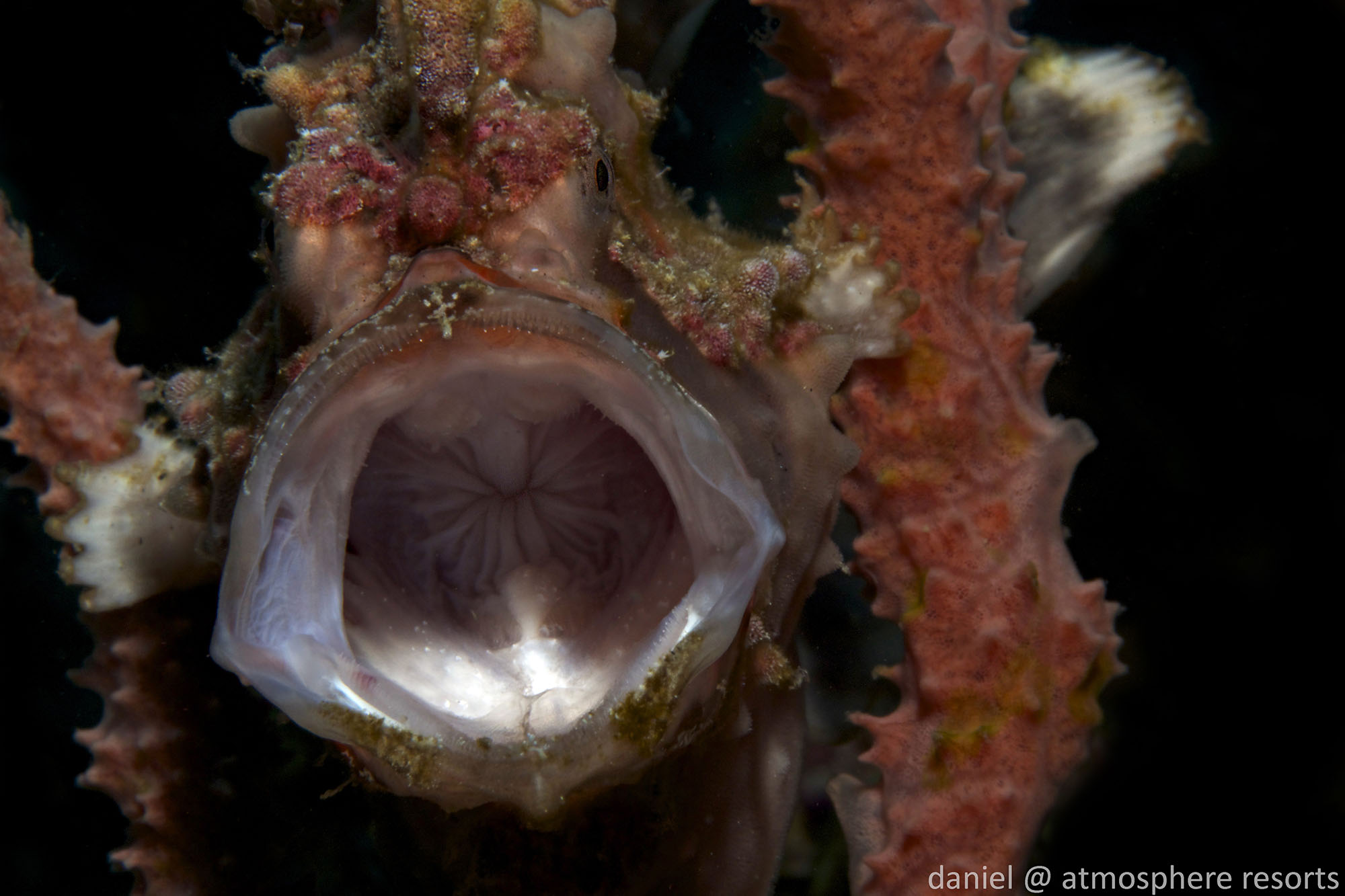 Check out that muscle! This frogfish did not like my presence.

There are three kinds of frogfish yawns

There are three different variations of the frogfish yawn. The biggest and most photogenic yawn is unfortunately a reaction to stress.

The frogfish will yawn to show just how big it can open its mouth, basically saying – “Hey, you can fit in my mouth, which means I can eat you, so back off.” Many people think that frogfish can see their reflection in a camera lens, meaning a potential rival and/or predator. Considering that frogfish cannibalism exists, this makes a lot of sense and can potentially be seen as either aggressive or defensive.

This juvenile was coughing out sand after a successful attack.

It’s not a frogfish yawn, it’s a cough…

The second variation of the frogfish yawn is actually more of a cough. You normally see this yawn after a frogfish has eaten. When swallowing its prey, there is a high chance of undesirable or undigestible objects, such as scales, bits of sand, even a mantis shrimp club (https://vimeo.com/143384033). The frogfish will cough up and spit out these objects, which involves opening its mouth pretty wide, though not as open as the stressed yawn. It is also a much quicker yawn, usually a few in quick succession, and  you can see particles or objects expelled from the frogfish’s mouth. 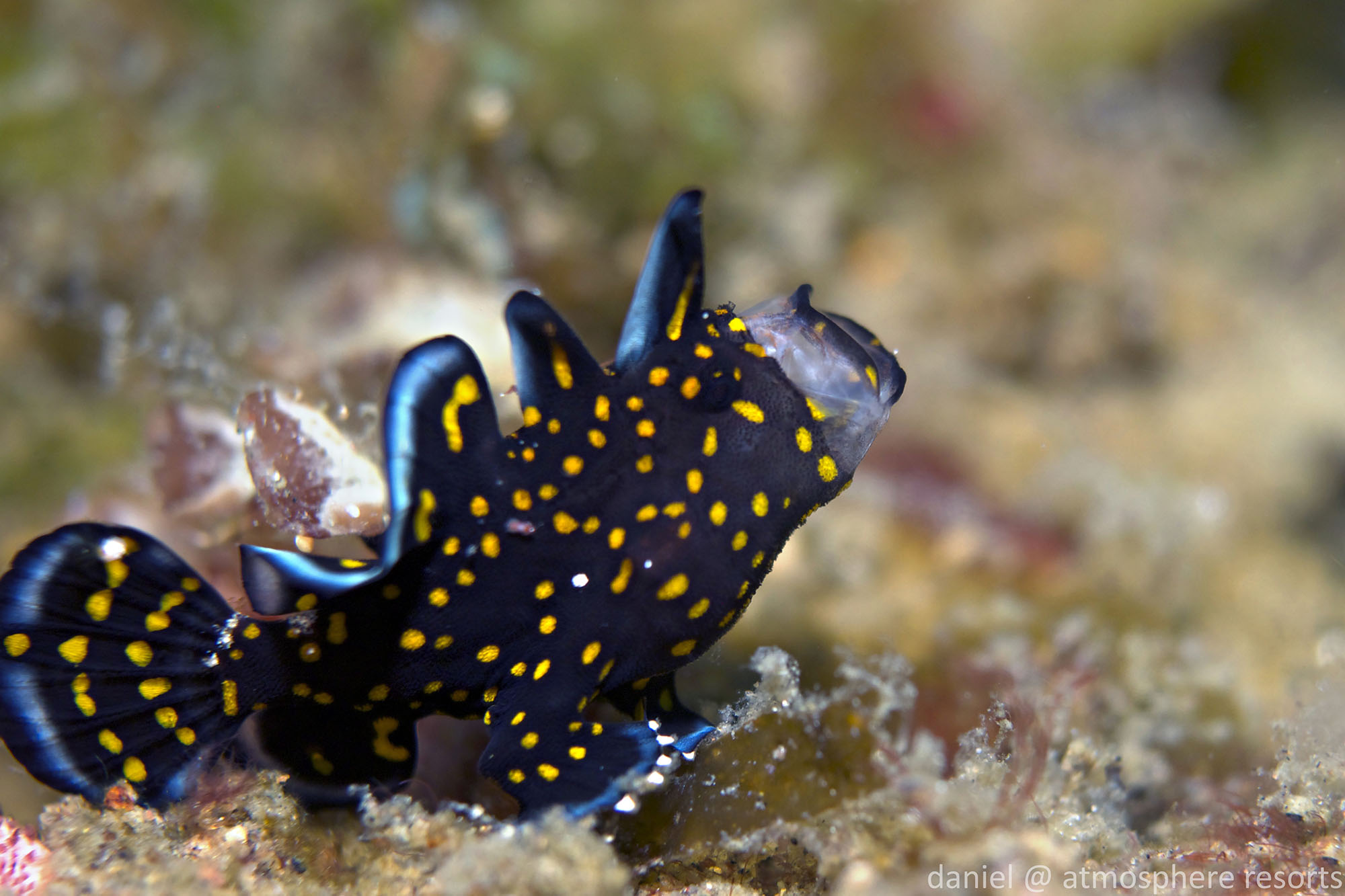 This yawn happened just before the frogfish started hunting.

It’s not a frogfish jawn, it’s more like dentistry…

The third variation of the frogfish yawn is a realignment of their jawbones. You normally see this yawn before a frogfish eats. During a normal day, the jawbones can get misaligned, either due to previous feeding events, swimming, or anything involving the movement of the mouth. This can have an effect on the probability of a successful attack. The frogfish will yawn before feeding, which restores its jawbones into their normal positions, increasing the probability of a successful attack. This is kind of like how we stretch before sports or other strenuous activities.

Does the frogfish jawn? Leave it alone.

Next time you see a frogfish yawn, try to figure out which one of the three variations it is. Keep in mind if it has eaten or eats afterwards, how long it has been exposed to cameras, and if anything is expelled from the mouth. Remember, if a frogfish keeps yawning at the camera, that’s not a sign to continue photographing, it is a sign that the frogfish has had enough.