Hey everybody, this is Daniel and I’m the new marine biologist here at Atmosphere Resorts & Spa.

I’m very excited and really looking forward to sharing my love of the ocean with you on this blog, as well as with everyone at Atmosphere. Dauin is my favorite place to dive, I’ve been here seven times, and each time I fall in love with this place more and more. Since I’ll be posting pictures and blogging a little bit, I’d like to tell you a little bit about my myself and how I arrived to where I am today.

I was born and raised in Orlando, Florida which is an hour from the ocean, specifically New Smyrna Beach, the shark bite capital of the world. I grew up loving aquariums, the beach, and sharks, especially sharks. I still have a collection of shark toys, about ten different species, that I used to play with while taking baths when I was little. My parents would give me shark-themed maze books and word-searches so that I would behave while we were out to dinner. Every year on TV in the United States we have a series called Shark Week that is 100% focused on sharks and I always had to watch, unless I was in trouble, but you don’t need to hear about that.

As I grew up, I never lost my love of sharks. When I graduated high school, I decided to pursue a career in Athletic Training/Sports Medicine, but that idea lasted about two months. I transferred to Auburn University after one year, realizing that marine biology and working with sharks was not just a fairy tale, and switched my major. We did all of our lab-based marine classes at the Dauphin Island Sea Lab in Alabama and the first course I signed up for was Shark and Ray Biology. Needless to say, it exceeded expectations and my professor from that course, Dr. Trey Driggers, has definitely had a huge impact on my life.

During college, I spent a semester volunteering in a lab that studied sea urchin genetics, but that wasn’t for me. After taking my shark class, I started going out with scientists from NOAA (National Oceanic and Atmospheric Administration) on 2-week trips to study the shark population off the Southeast Coast of the United States and the Gulf of Mexico. We identify, measure, and take samples from the sharks, as well as put identification or satellite tags on them, depending on what species, before releasing them back into the ocean. I have been out with NOAA every summer for 5 years and love getting hands-on shark research experience.

Immediately after graduation in 2011, I came to the Philippines for the first time to volunteer with the Thresher Shark Research and Conservation Project on Malapascua Island. I fell in love with the Philippines and knew that it was the perfect place for me. I was there for two months studying the behavior of thresher sharks that come everyday to a ‘cleaning station’ where small fish called cleaner wrasse pick off their parasites every morning. I returned home to Florida and volunteered with a project studying Lemon Shark aggregations off the coast of Florida where they turn up by the hundreds for a few months starting every January. Every year scientists tag and release a lot of these Lemon Sharks, so now when the sharks get close enough to one of the hundreds of underwater receivers along the coast of Florida, the tags will send a signal and we can track their movements.

My next step was an internship at Mote Marine Laboratory in Sarasota, Florida for a few months. I enjoyed my time there, but I was mostly in charge of aquarium maintenance and water quality testing and I am definitely more of a “field work” kind of guy.

I came home again and got in touch with one of my friends I volunteered with in Malapascua. She was then the Principal Investigator at LAMAVE, an NGO that is studying the whale sharks in Oslob, which is not too far from Dauin. I went back to the Philippines towards the end of 2012 to volunteer for her in Oslob and she left for another job two weeks later, leaving myself and another volunteer to take over. I ended up staying with LAMAVE for ten months, spending time in Oslob and at another base in Southern Leyte, also in the Philippines, studying whale sharks there as well.

After LAMAVE, I went home for a bit, then came back to Malapascua last September to help start an NGO called Project SharkLink, which is focused on creating a Marine Protected Area around the thresher shark cleaning station I mentioned earlier. We have been off to a slow start because all of our effort has been directed towards rebuilding Malapascua after the typhoon, but I have high hopes for the future of SharkLink and the island. I left the day before the typhoon and went home to complete my PADI DiveMaster certification so I could come back to Dauin and take my instructor course with Instructor Development Philippines.

I returned to the Philippines this January for the PADI Instructor Course here in Dauin, which was a great experience and a perfect way to introduce myself to the Atmosphere family. I have known Adam, the dive shop manager, for over a year, so it was nice to see a familiar face everyday. All of the people I have met here – managers, instructors, dive masters, and everyone else – have been amazing to me and beyond helpful. I am incredibly happy to be a part of this family and I can’t wait to share my passion with the Atmosphere staff, guests, and all of you out there reading this blog and our facebook page. Stay tuned for more posts and updates, you never know what I might write about next! 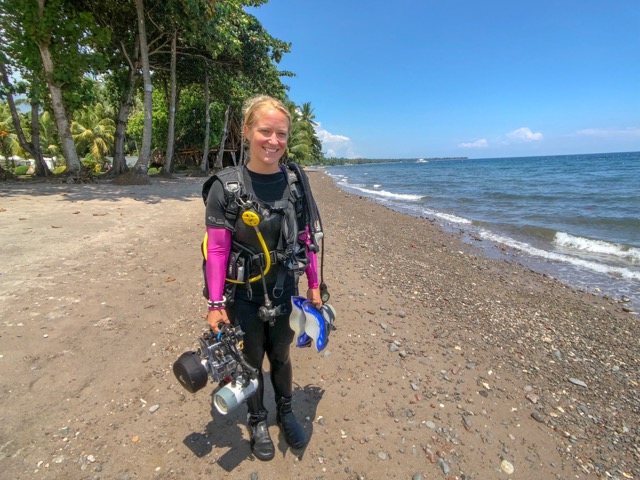 “Wanna move to the Philippines?!” – Sure!