Muck diving has a lot of weird and wonderful critters, but my favorite critters (besides frogfish) are the ones that really go above and beyond when it comes to taking advantage of the environment. Its one thing to change color or simply look like your surroundings, but there are a few crazy crabs I want to highlight that really get their money’s worth from the environment. There are many species of crabs, including hermit crabs, that utilize their environment as camouflage. They don’t just blend in with their surroundings, they become their surroundings. They will remove plant material, hydroids, anemones, some will even grab sea urchins, to enhance their camouflage. Some hermit crabs even have anemones on their shells that are found nowhere else, only on hermit crabs!

Decorator crab: This crab attaches anemones and coral polyps to its body

Halimeda crabs are a species of crab that uses large algae, called halimeda, as their camouflage of choice. These small crabs are normally green, although I have seen a few white ones near dead halimeda, and their body actually mimics a single leaf of halimeda. They go a step further and will clip off a leaf or a few leaves, position them in their claws, and then stick it to the top of their head. After holding there for awhile, the one I witnessed took about 15 seconds, the crab lets go and it sticks! There are a few other “decorator” crabs that are similar – although they don’t have the body that mimics their surroundings, they have been known to attach sea grass, sponges, and even hydroids to the tip of their head. One species is quite large and attaches anemones or coral polyps to its body.

Decorated spider crabs are a beautiful crab that is normally encountered during night dives. Similar in size to the Halimeda crab, it uses its whole body as a surface for its camouflage of choice – anemones. Anemones will usually cover the whole body, even the arms, which allows this crab to stealthily move around the coral and sponges at night.

Boxer crabs, also called Pom Pom crabs, are probably the best example of an animal using the environment to its advantage, although this is for hunting and defense instead of camouflage. Boxer crabs will place an anemone in each claw and have adapted to this way of life to the point where their claws are more like tweezers whose only job is to hold the anemones. Some crabs will use the anemones as a utensil – they will touch them to food, which then sticks to the anemones, where they will then bring the food to their mouths and eat whatever food they caught. Others will wait for the anemones to catch food on their own and then scrape the food off.  They have also been seen using the anemones defensively by thrusting them at fish that encroach their personal space, hence the name Boxer crab. 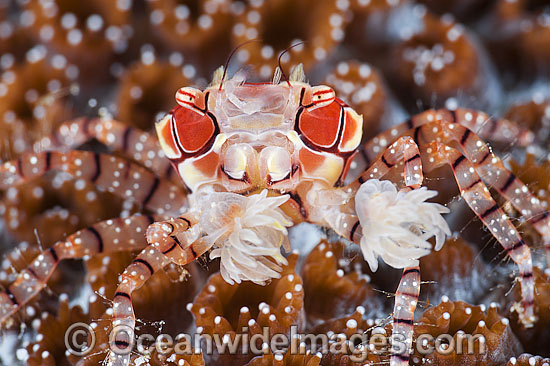 These crabs are unique in that many populations of Boxer crabs have genetically identical anemones. In a recent study, Boxer crabs with their anemones removed were seen to steal one anemone from the other crab in their tank. Each boxer crab would then tear the anemone in half, resulting in each crab having two anemones. One species which was studied has anemones that have never been documented on their own in the wild – they have only been found attached to Boxer crabs. If you want to read more about this study, you can find it here.