Are there sea snakes? 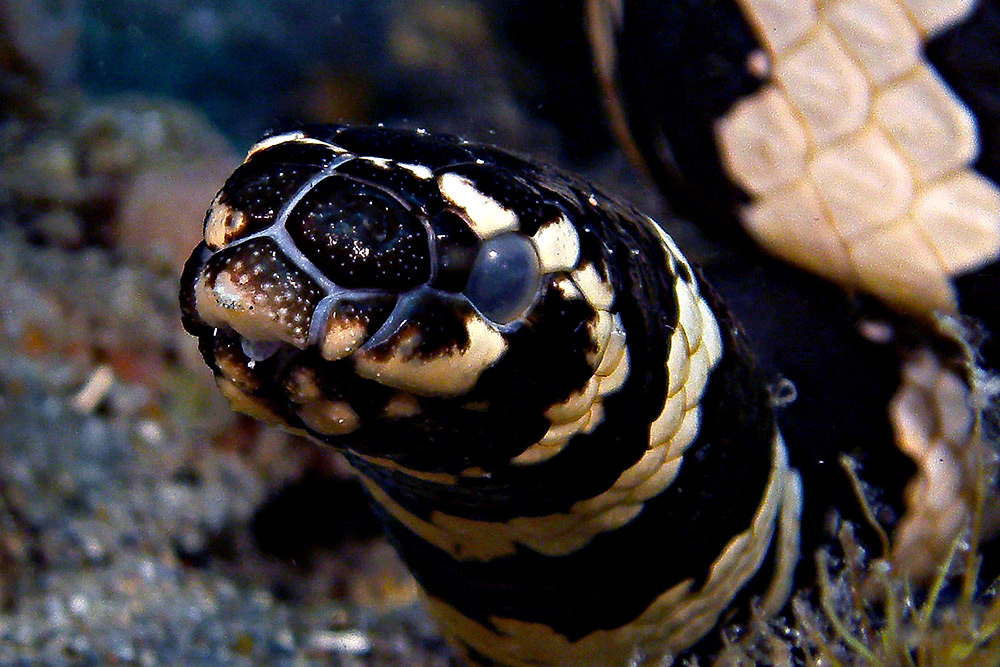 This is a question I am asked very often from divers and snorkelers alike. Snakes, like most creatures in the ocean that are poisonous or venomous, come with misconceptions. Many people are very afraid of sea snakes, but when it comes down to it, they have no reason to be. Not all snakes are venomous – of the four species we have in Dauin, two have no venom. The ones with venom don’t even inject the venom each time they bite. Sea snakes are also some of the most docile creatures you will see underwater. You think clownfish are cute and adorable? They are MEAN, especially when protecting eggs. I would much rather get closer to a snake than a clownfish. Snakes, on the other hand, ignore divers completely to the point where they will swim through your legs if you are not paying attention because that is the quickest way for them to get to their destination.

Sea snakes spend most of their time in the ocean although they do come on land to lay eggs, to rest, to digest, and some even to shed skin. Most have a tough time on land because their tail is shaped for swimming so it can’t find any traction on land to slither around. Snakes, being reptiles, must surface for air, so you can sometimes see them hanging out on the surface. Many times they will surface near snorkelers or boats – not to attack but because a big shadow means protection from predators. They are using us for their protection.

Turtle-headed Sea Snake (Emydocephalus annulatus) – this sea snake is encountered on almost every dive on our house reef due to the family of snakes that lives there. We have seen up to 14 on one dive. These snakes are not venomous and use a special tooth in their mouth to scrape fish eggs off of rocks.

Yellow-lipped Sea Krait (Lauticauda colubrina) – this sea snake can be seen all over Apo Island and occasionally on the Dauin coast. This is a highly venomous species but they hunt eels. Males hunt smaller eels while females hunt larger ones. You can identify these snakes by their yellow face in addition to their blue/grey and black stripes. They pay no attention to divers and focus on finding prey instead.

Black-banded Sea Krait (Laticauda semifasciata) – this sea snake can be seen in the deeper waters of Apo Island, usually around 18-30 meters. If you’re lucky you can encounter this snake hunting in groups with small schools of jacks! This is a highly venomous species but it prefers to investigate cracks for small fish that it bites, injects with venom, and swallows head first. In the 1930s there was a sharp decline in sea snake numbers since roughly 20-30,000 snakes were being harvested from Gato Island (Malapascua) each year, most of them black-banded sea kraits. This species looks like the yellow-lipped sea krait but has a dark face and its stripes look ‘faded’ and not as symmetrical. 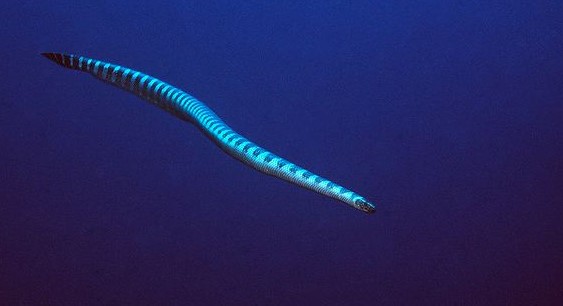 Filesnake (Achrocordus sp.) – this sea snake is rarely encountered in Dauin but I have seen it a few times. It looks just like a python down to its scales and behavior and is called an ‘aquatic’ snake. This is a non-vemonous snake and is actually a constrictor – it uses its rough, loose skin to wrap and hold on to prey. It hunts small fish like catfish. It can be identified because it is green with faint stripes and looks nothing like the other three species of snakes.

Next time you are swimming in the ocean and encounter a sea snake, don’t be afraid. and instead watch it hunt and navigate the reef.