One of the cutest, and most awkward, fish in the ocean is the yellow boxfish – specifically the juvenile. We have plenty of them in Dauin and usually have a few residents that live on the house reef. They’re not the most graceful, but they’re always great fun to watch.

The yellow boxfish (Ostracion cubicus) is a common sighting throughout the Indian and Pacific Oceans, with some in the Atlantic Ocean, although concentrated in the south eastern areas. They can grow to a maximum size of around 30-40 cm. These fish are indeed box shaped, hence the name, but are tiny little spheres when they are really young. They mainly feed on algae, but can also feed on small animals like crustaceans and molluscs, and occasionally small fish.

Yellow boxfish have a nice defense mechanism considering they don’t have big teeth and can’t swim very fast. They can release proteins from their skin into the water, proteins that are poisonous, which can harm and even kill other fish that are near them. This is one reason they have such extreme coloration – this is a warning sign to other animals.

Boxfish are a popular animal for the fish trade. Many are taken from Asia and exported to other continents where they are not found, such as North America and Europe. 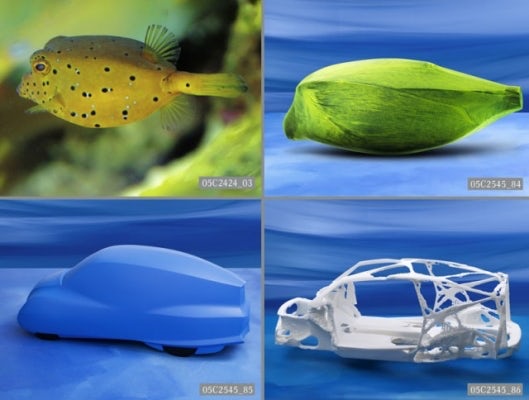 Evolution from fish to car

Boxfish are also popular when it comes to cars. In 2005, Mercedes-Benz released a concept car, the Bionic, which was modeled after the yellow boxfish. They wanted to increase the aerodynamics so they used the body of the yellow boxfish as a model to mimic its reduced drag and strong, rigid exoskeleton. The final product produced less drag than any car in production. Due to the small faces of the boxfish and the car, compared to a large body length, the air is able to move over the body more efficiently.

Mercedes-Benz bionic in the showroom

Next time you see a yellow boxfish spinning in circles and looking completely lost, realize that it is doing so with ease and its body is slipping right through the water. Who would have thought this little, box-shaped fish is actually very aerodynamic?