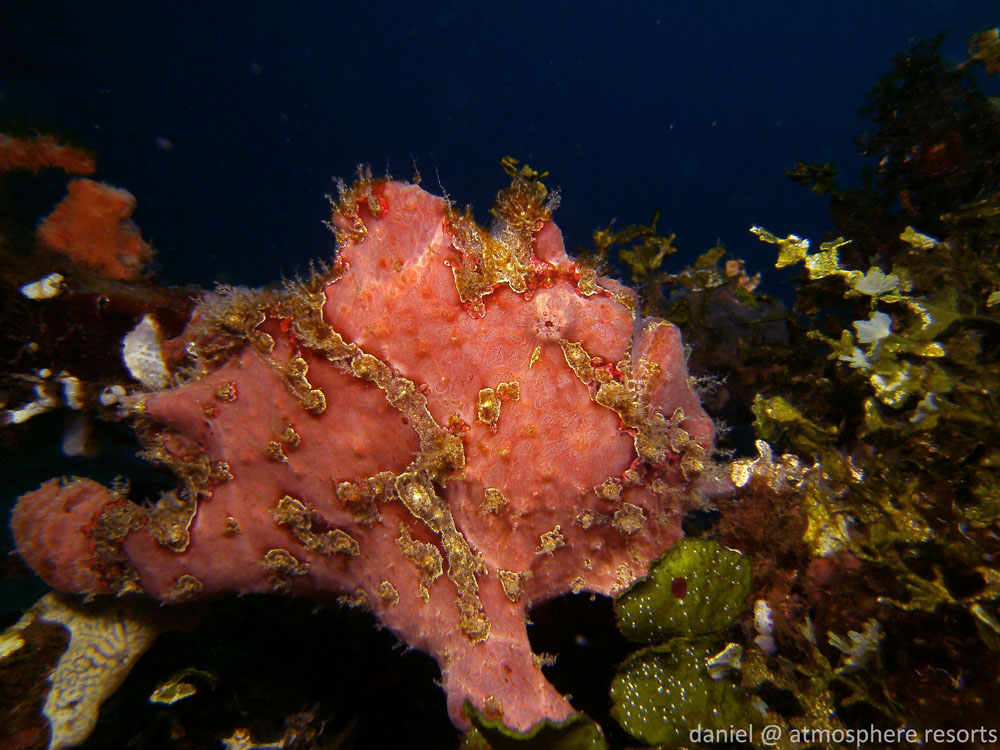 Of all the critters on the Dauin coast, there is one that definitely stands out as a favorite of many divers and that is the frogfish. Whether the size of a grain of rice or a dinner plate, we never get tired of seeing them here at Atmosphere. Frogfish are one of the most interesting critters in the ocean and come in every shape, size, and color imaginable. We have an abundance of frogfish on the coast and that is one of the many reasons that Dauin is a great place to visit. Practically any dive site you go to in Dauin has a frogfish hiding somewhere. We even have a few dive sites where you can see upwards of six on a single dive and, at the moment, have a few resident frogfish at our house reef.

Many frogfish can change color according to their surroundings, which is one of the reasons why they are so hard to find. They don’t move much, which is why algae and polyps can begin to grow on their bodies, further enhancing their camouflage to the point where you might be looking straight at a frogfish and have no clue that it is there. They are a true anglerfish and thus an ambush predator. Frogfish have a lure above their mouth that they wave in front of prey that can mimic a shrimp, fish, or worm. When the prey gets close enough and thinks it has an easy meal, frogfish can open their mouths in six one-thousandths of a second to swallow the prey whole, one of the fastest movements in the animal kingdom. Frogfish can swallow anything that is their own size, if not a bit bigger, and they can even fold a fish in half in their stomach. They have a special muscle that closes behind the prey so it cannot escape once swallowed. They are found worldwide in tropical and subtropical waters, except the Mediterranean Sea, so they are not restricted to the Indo-Pacific, although they are more abundant here. There is only one species of frogfish, the Sargassumfish, that is actually distributed worldwide. It rides the currents while floating on Sargassum, a type of seaweed, and has been documented as north as Norway.

There are around fifty species of frogfish in the world with new species still being discovered. Here in Dauin we have four common species that are sighted regularly – the Giant frogfish, Painted frogfish, Clown (Warty) frogfish, and Hairy (Striated) frogfish. The Giant frogfish is the largest species in the Pacific, growing to near 40 cm. There are sometimes other species, like the Freckled Frogfish, Randall’s Frogfish (which only grows to 4.5 cm), Bandfin Frogfish, and occasionally the Sargassumfish, but they are not as common and not encountered very often. Depending on its surroundings, the Hairy frogfish can actually grow hair-like projections and become perfectly camouflaged in the surrounding algae or soft pulsating coral. It’s very hard to tell frogfish species apart unless you can see their lures. Each of the four species common in Dauin has a different length rod and different shaped lure. The Giant frogfish lure is a small bush with long filaments. The Painted frogfish lure is a small bush with short filaments. The Clown frogfish lure resembles a small shrimp while the Hairy frogfish lure resembles a wriggling worm.

This is a great time of year for finding frogfish in Dauin. We have seen six different species in the area in the past month, including two rare Randall’s frogfish on the Atmosphere House Reef. We have also found at least nine different frogfish on the house reef in March alone. Right now, all of the juvenile frogfish have started showing up along the coast. They are usually found sitting in the sand, camouflaged against predators by resembling a poisonous flatworm or nudibranch. Most of the frogfish we are finding at the moment are around the size of a fingernail, but it is fun watching some of them grow. There is one Painted frogfish that has at least tripled in size since we first saw it and we hope it stays for awhile. We have even had a sighting at Richard’s Point of one of the most interesting frogfish colorations. It is a rare pattern of a juvenile Painted frogfish – black, covered in orange polka-dots, with light blue outline around its fins – that is only colored that way when it is very young, only a few centimeters. This particular pattern also mimics a specific flatworm. For any frogfish lovers out there, Dauin should definitely be on your list of places to visit, and if you’ve already been here, then we hope you’ve already fallen in love with frogfish and plan on coming back. Keep your eyes open when you’re diving – you never know what tiny rock, sponge, or nudibranch may actually be a frogfish, or what crawling nudibranch might be a juvenile frogfish in disguise!