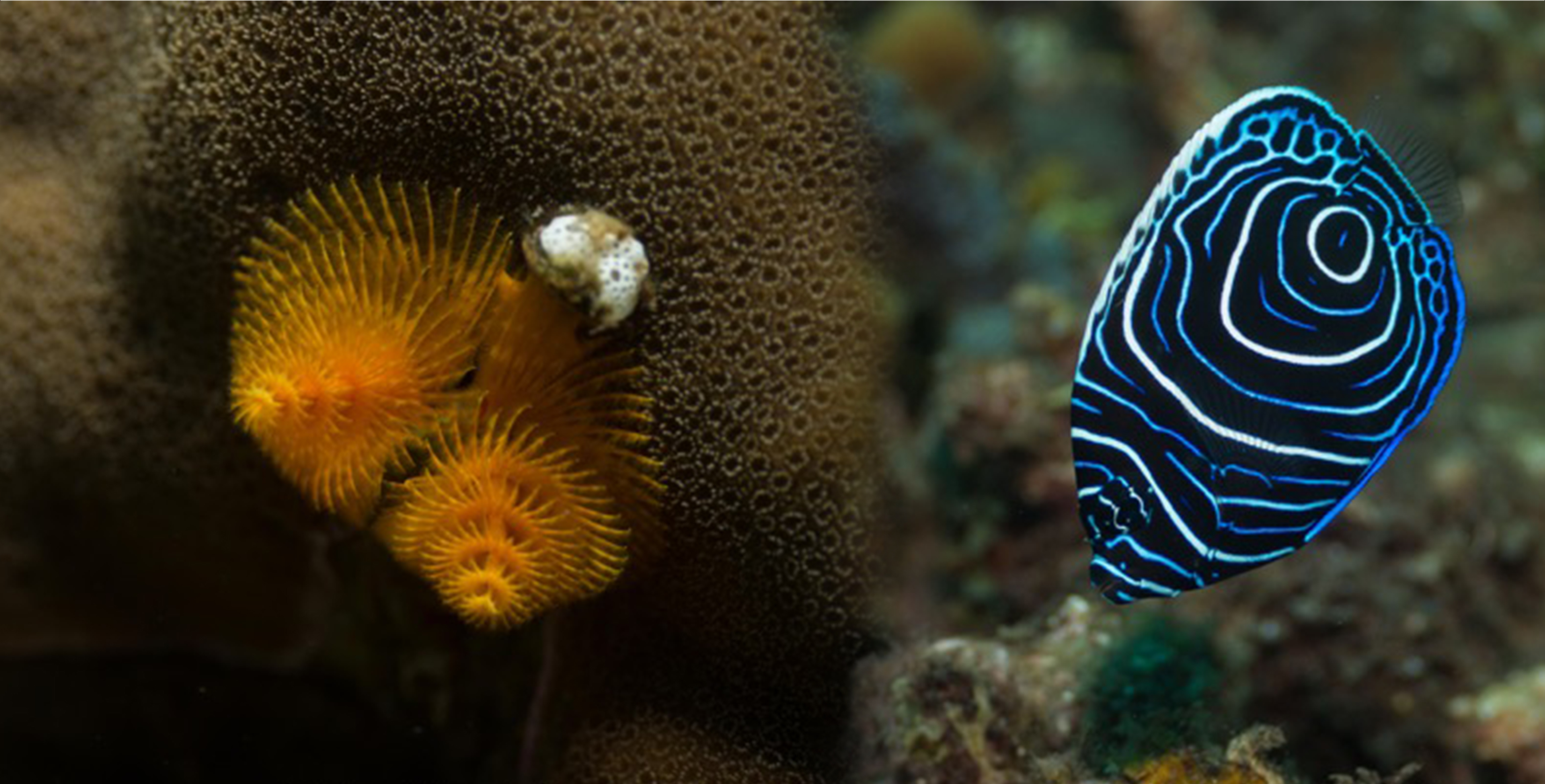 Aptly named to be at the top of our list, Christmas tree worms are a type of tube-building polychaete worm. Their multicoloured (and tree-like) spiral tentacles can be seen poking out of holes they’ve board into corals and are used to catch passing prey which is then passed down into their mouths.
Popular with photographers, these brightly coloured underwater Christmas trees will disappear in front of our eyes should they sense anyone getting too close. 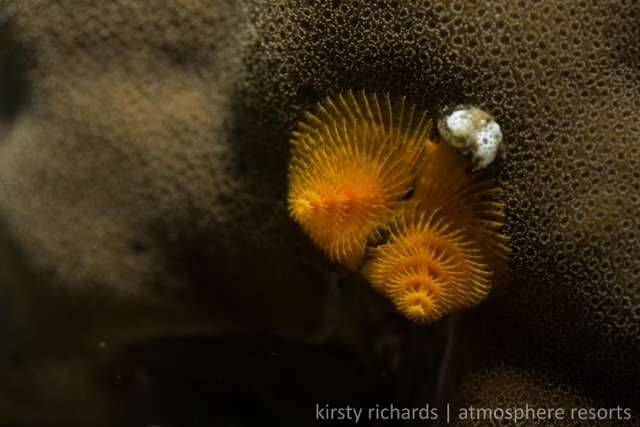 Despite it’s name, I like to think the Humbug dacyllus is a happy little fish and would fully embrace Christmas.
This bold black and white striped fish feeds on algae, invertebrates and tiny zooplankton, and will quickly retreat into the safety of its home among the strands of branching coral should any potential danger pass by. 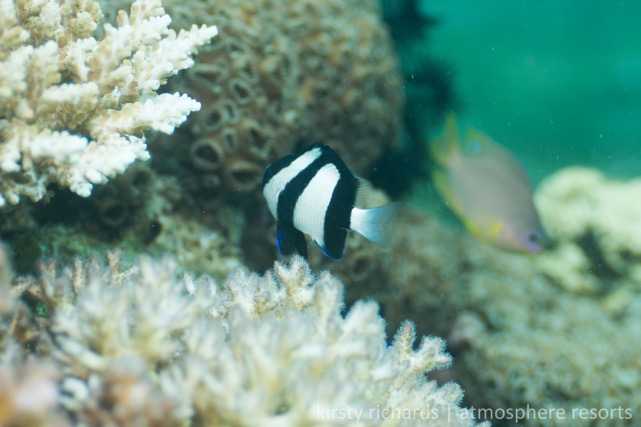 No two snowflakes are alike, and the Snowflake moray eel’s mottled white colouration reflects that of winter’s snowflakes – making it a strong player on our “Christmas Critters of Dauin” list.
Commonly encountered at many of the dive sites we visit, they’re often seen poking their small head out of cracks and crevices on the reef. Reaching up to 3ft in length, this mid-sized eel spends the majority of its day finding its next meal of shrimp or crabs.
Moray eels have an interesting way of eating their prey – by using their two jaws! Once the main set of jaws has latched onto it’s prey, the second set jump up from within its throat, pulling its prey down into its oesophagus. 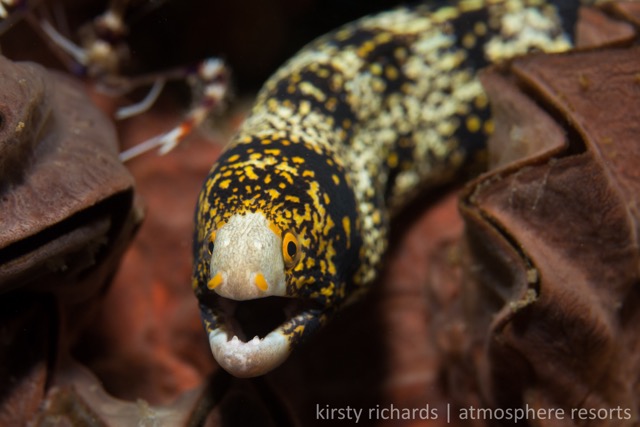 Angelfish are a common sight along our coast. These large and graceful reef fish come in all the colours you could imagine, with the Emperor angelfish being one of my all-time favourites. 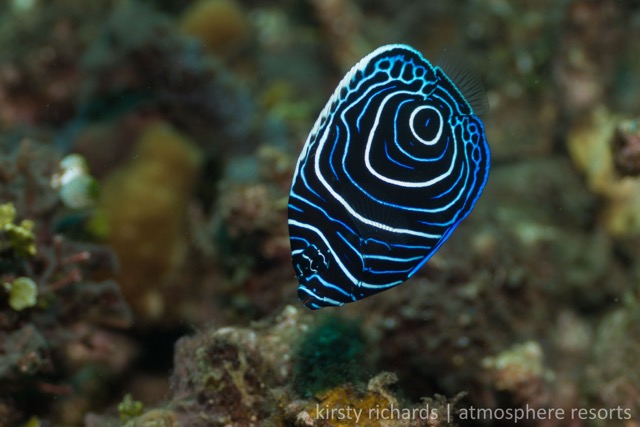 The juvenile of this species wouldn’t look out of place as a Christmas decoration, with it’s iridescent purple, white and blue swirls. The dramatic change in pattern from young to adult is thought to help avoid the interrogation of territorial adults.
Angelfish are greatly dependent on our reefs for the protected habitat they provide, enabling them to shelter from predators in amongst the corals. 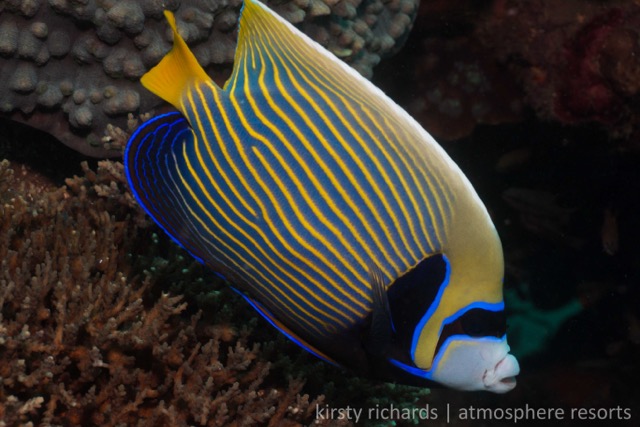 With a latin name like ‘Linckia laevigata’ it seems this sea star would fit in just as well in a Harry Potter spell book as in a Reef Creatures ID book!
Mostly found as a beautiful blue colour, this sea star has incredible regeneration abilities – enabling them to re-grow arms bitten off by predators. Even more remarkably, they can produce ‘comets’ or arms, separated from it’s main body which grow and develop into a whole new sea star! 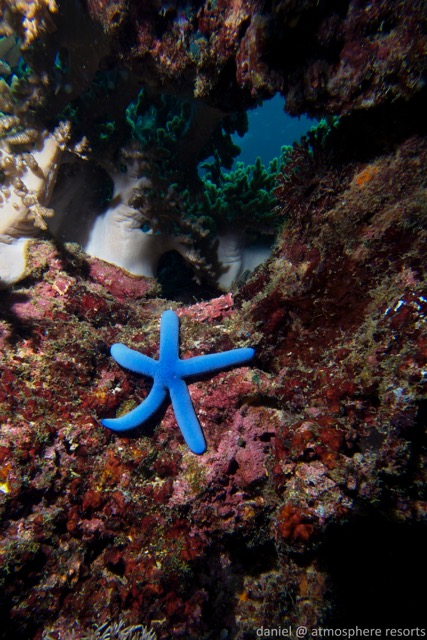